GOLF
The desert is an unlikely place to have golf courses, and of course the lack of water makes it difficult to green even the smallest of gardens, an 18-hole course being a virtual impossibility.

The aristocracy, however, remained enamored of the gentlemen's game that was so popular in British India.

That 9-hole course is still the only one in Jaipur and, in fact, in Rajasthan, and though it is not a professional course, it is good for a round of golf in what are picturesque surroundings: a palace next door, and peacocks on the hazards…

A golf course in Bikaner is unconventional in that the course exists exactly in the nature of the desert terrain, and even the ‘greens’ have been replaced here by ‘browns’ which, if nothing else, are at least unconventional.

HORSE POLO
The Jaipur Royals were a formidable polo playing family, and the last maharaja of the state literally died with his spurs on, on a polo field. With the glamour of the game, they drew international publicity for India, and the sport has remained one of the most prominent in the elite social circuit. Along with Jaipur, there are also formidable polo teams in Jodhpur and Udaipur, while the 61st Cavalry, also based in Jaipur, has kept it alive in the army. 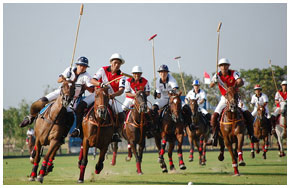 It is not possible to simply arrive and start playing polo, since the sport needs especially bred horses in large numbers. These are largely maintained by the players themselves, or with the help of their sponsors. You will therefore have to seek out an invitation to play, something you are best advised to do in advance. However, it is possible to send in a special request while planning your trip to Rajasthan, especially if you are a group with polo-playing members. This is important because, in season, when the game is played (September-March), the polo teams are often out (in Delhi, Calcutta or Mumbai) on the circuit, or may even be playing overseas. Of course, there is also the chance of having visiting teams in Rajasthan coinciding with the time of your visit. Even if you do not get the chance to play, there is every chance of being able to watch the sport as an observer - which is almost as good as playing. There is something extremely satisfying about watching men on their horses as they pursue the ball with their sticks with skill and adroitness.